In many countries, it is still illegal for members of the LGBT community to adopt and foster children. The following map uses data from the International Lesbian, Gay, Bisexual, Trans and Intersex Association (ILGA World) to show where joint adoption and second-parent adoption are allowed, along with the countries where there are no laws allowing same-sex couples to adopt.

A joint adoption is when a couple adopts a child who was not previously the legal child of either partner. A second-parent adoption, however, is when a partner, who is not biologically related to the child, adopts their partner's biological or adopted child. As our chart shows, a liberal stance on gay rights can be seen across Western Europe and North America, where at least some form of adoption is permitted. While most of the region’s countries support both kinds of adoption, in Estonia, San Marino, Slovenia and Switzerland, only second-parent adoption is permitted.

South America shows more of a mixed picture with Brazil, Costa Rica, Argentina, Uruguay and Colombia all supporting the continent’s more progressive laws. Meanwhile, South Africa is the only country in Africa to support both kinds of laws, according to ILGA.

This map reflects the ILGA’s latest data, which is from 2020. Chile, Switzerland and Croatia have since legalized LGBT adoption and the next update will reflect these figures. 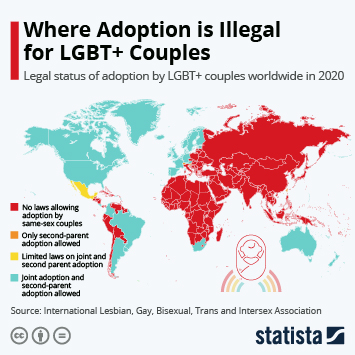 This chart shows the legal status of adoption by LGBT+ couples worldwide in 2020.

Get in touch with us quickly and easily.
We are happy to help!

Do you still have questions?